On Good Friday we accompany Christ on his way to the Cross as we make our walk of witness. This year, once again, our walk of witness is a virtual one, as we take time to reflect on some of the moments on that journey and to pray together. 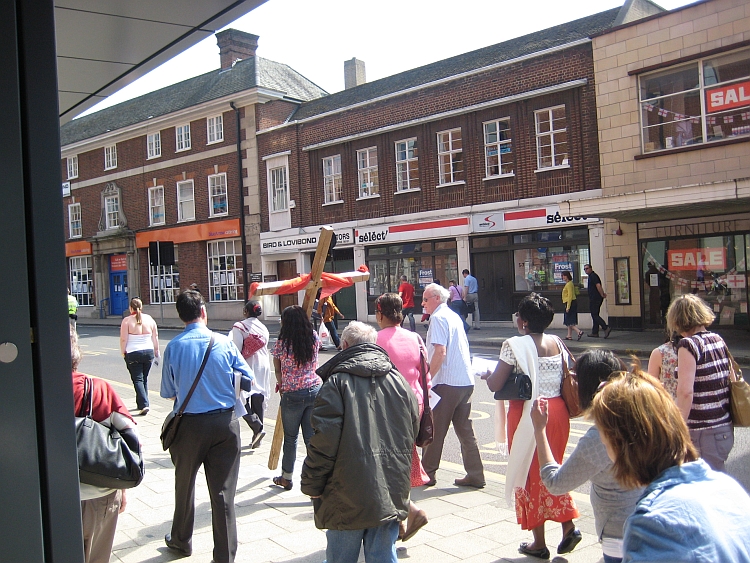 Station 1 – Jesus is condemned to death

As we begin our walk of witness, we remember how Jesus was condemned to death, despite being innocent of the charges brought against him:

“’What shall I do, then, with the one you call the king of the Jews?’ Pilate asked them.

‘Crucify him!’ they shouted.

‘Why? What crime has he committed?’ asked Pilate.

But they shouted all the louder, ‘Crucify him!’ “

Wanting to satisfy the crowd, Pilate released Barabbas to them. He had Jesus flogged, and handed him over to be crucified.” (Mark 15: 12-15) 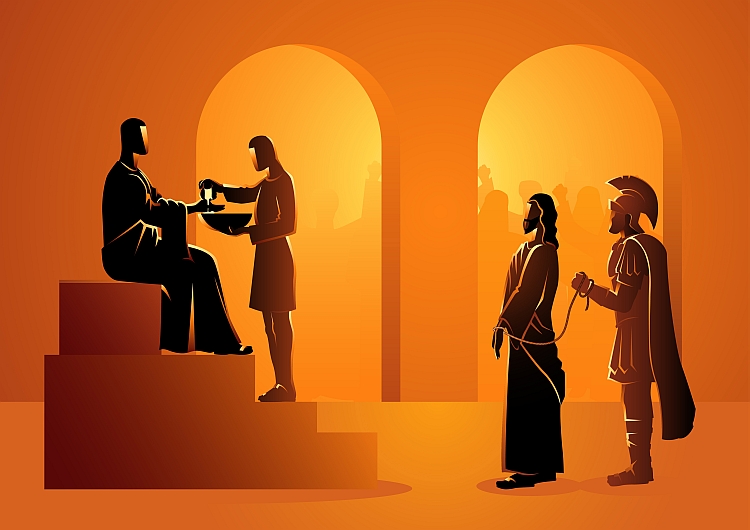 Pilate knows that Jesus is innocent. He looks for a way to free him, but his heart is divided. And so, he lets his position and self-interest prevail over what is right. Many of those who demand Jesus’ death are caught up in the crowd; shouting because everyone else is shouting; shouting the same thing as everyone else. And so, justice is trampled underfoot by weakness and fear; the quiet voice of conscience drowned out by the crowd.

How often this happens in our lives too. Truth is compromised by indecision and concern for what other people think. Let us beg forgiveness for these times and ask for the grace to walk the paths of righteousness:

Lord, you were condemned to death because fear suppressed the voice of truth. How many times have we ourselves allowed fear to triumph over truth? Strengthen your own quiet voice in our lives so that we may choose what is right over what is easy. Amen.

“Then the governor’s soldiers took Jesus into the Praetorium and gathered the whole company of soldiers around him. They stripped him and put a scarlet robe on him, and then twisted together a crown of thorns and set it on his head. They put a staff in his right hand. Then they knelt in front of him and mocked him. ‘Hail, king of the Jews!’ they said. They spit on him, and took the staff and struck him on the head again and again. After they had mocked him, they took off the robe and put his own clothes on him. Then they led him away to crucify him.” (Matthew 27:27-31) 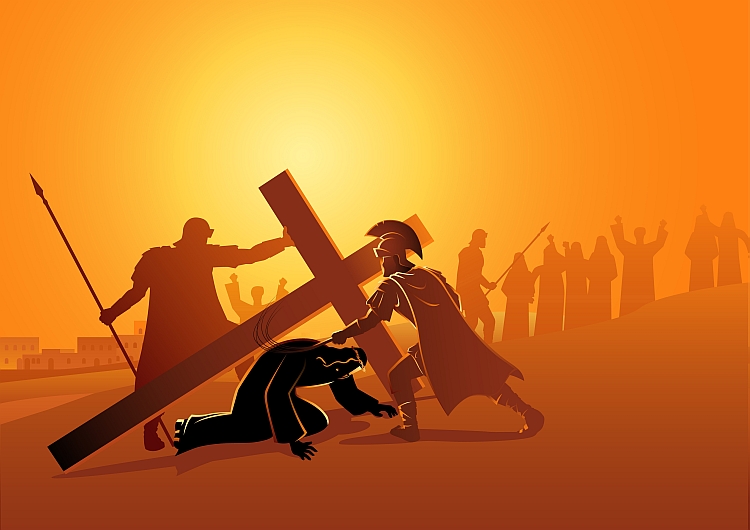 The physical suffering and humiliation that Jesus suffers at the hand of these soldiers is immense. They seek only to taunt, hurt, and humiliate. But in the end, they unwittingly pay tribute to his true identity as the king who allows himself to be stripped and dressed as a slave… all for our sake.

At the start of Matthew’s gospel, Jesus is described as Emanuel – “the God who is with us”. As Jesus is condemned, humiliated, tormented and led out to die, we see just how far God will go to show us that this God is, indeed, with us always, everywhere, and to the very end. 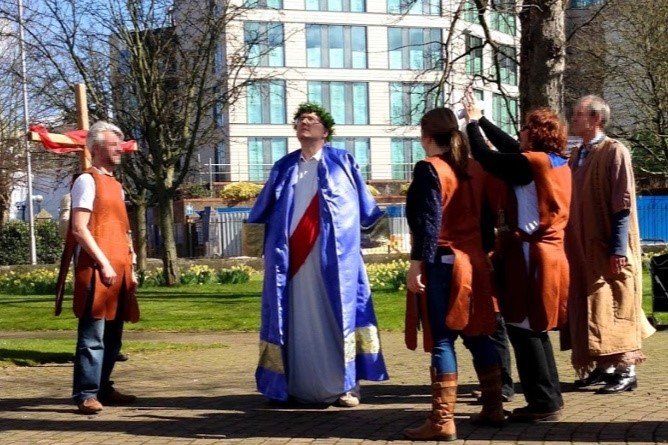 Dear God, as we contemplate the cross, remind us that you took on our lot and our life that we might know and share your profound love. In Jesus’ name, Amen.

“As they were going out, they met a man from Cyrene, named Simon, and they forced him to carry the cross.” (Matthew 27:32) 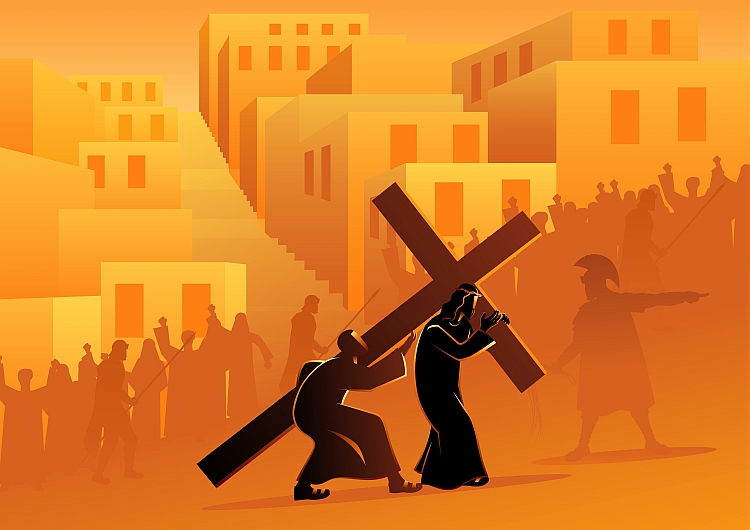 “Then Jesus said to his disciples, ‘Whoever wants to be my disciple must deny themselves and take up their cross and follow me.’ ” (Matthew 16:24)

Simon of Cyrene was a chance passer-by; he did not know how extraordinary that encounter was to be. The mystery of Jesus, silent and suffering, touched his heart. And so it is with us. God lies in waiting along the paths of our daily life and knocks on our door.

We find Him in the good times but also in periods of pain and difficulty, when we carry our own cross. Moreover, whenever we show kindness to the suffering, the persecuted and defenceless, and share in their sufferings, we help to carry that same cross of Jesus. 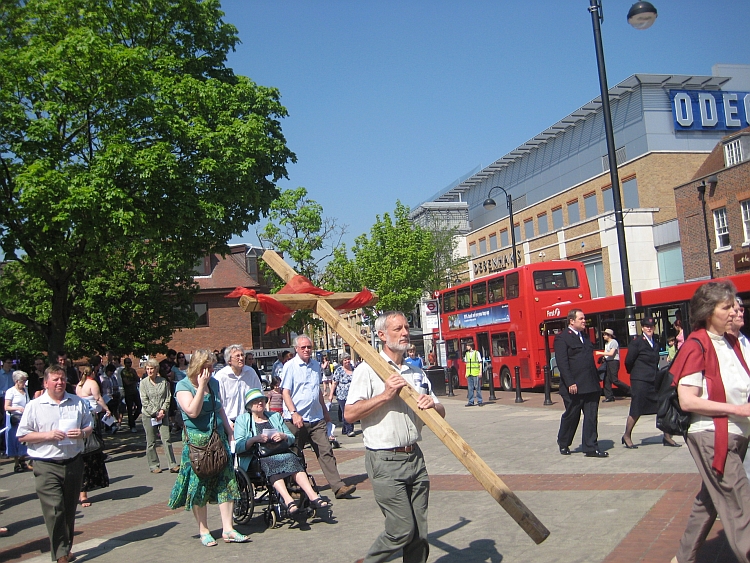 Lord, you opened the eyes and heart of Simon of Cyrene and gave him faith. Help us to share the cross of others, assisting those in need and, in this way, know that we are walking with you along the way. We pray for those who suffer in body, mind or spirit, for those who are struggling with fatigue, loneliness, anxiety, grief or illness. As you share their pain, give them strength and hope. Open our eyes to see them and protect us from indifference. Amen

“When they came to the place called the Skull, they crucified him there, along with the criminals—one on his right, the other on his left. Jesus said, ‘Father, forgive them, for they do not know what they are doing.’ 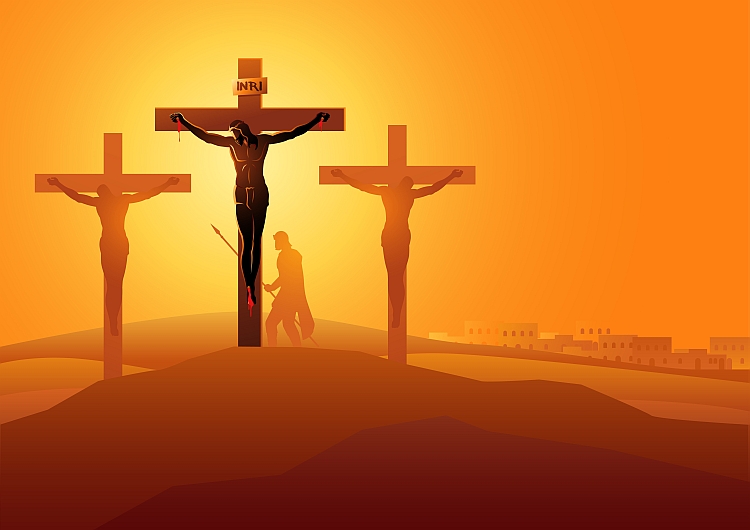 “And they divided up his clothes by casting lots. The people stood watching, and the rulers even sneered at him. They said, ‘He saved others; let him save himself if he is God’s Messiah, the Chosen One.’

The soldiers also came up and mocked him. They offered him wine vinegar and said, ‘If you are the king of the Jews, save yourself.’

There was a written notice above him, which read: This is the King of the Jews. One of the criminals who hung there hurled insults at him: ‘Aren’t you the Messiah? Save yourself and us!’

But the other criminal rebuked him. ‘Don’t you fear God,” he said, “since you are under the same sentence? We are punished justly, for we are getting what our deeds deserve. But this man has done nothing wrong.’

Then he said, ’Jesus, remember me when you come into your kingdom.’

Jesus answered him, ‘Truly I tell you, today you will be with me in paradise.’

It was now about noon, and darkness came over the whole land until three in the afternoon, for the sun stopped shining. And the curtain of the temple was torn in two. Jesus called out with a loud voice, ‘Father, into your hands I commit my spirit.’ When he had said this, he breathed his last.” (Luke 23: 33-46)

Jesus dared to challenge the authorities. He told them their view of God was wrong. He told them that God looks on us with love and that even though he knows our brokenness he still sees our beauty and longs for us to come alive and start again.

The rulers did not like what Jesus said. His ideas were dangerous; they turned things upside down. And so they came at night to arrest him and tried to silence him by execution on a cross. 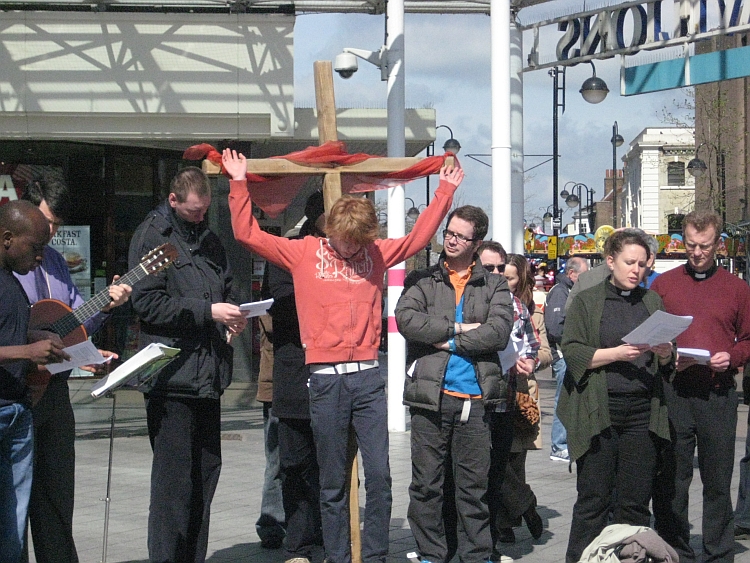 Lord Jesus we praise you. You love us so much that you came in person to rescue us and invite us home. When we rejected you and threw at you all the darkness in our souls, you absorbed it on the cross and died still loving and forgiving us. We thank you for a love that surpasses all wisdom and understanding. Help us to show forgiveness to others as you forgave us and to share your love with those around us. Amen.

Station 5  – The burial of Jesus

“As evening approached, there came a rich man from Arimathea, named Joseph, who had himself become a disciple of Jesus. Going to Pilate, he asked for Jesus’ body, and Pilate ordered that it be given to him. Joseph took the body, wrapped it in a clean linen cloth, and placed it in his own new tomb that he had cut out of the rock. He rolled a big stone in front of the entrance to the tomb and went away.” (Matthew 27:57-60) 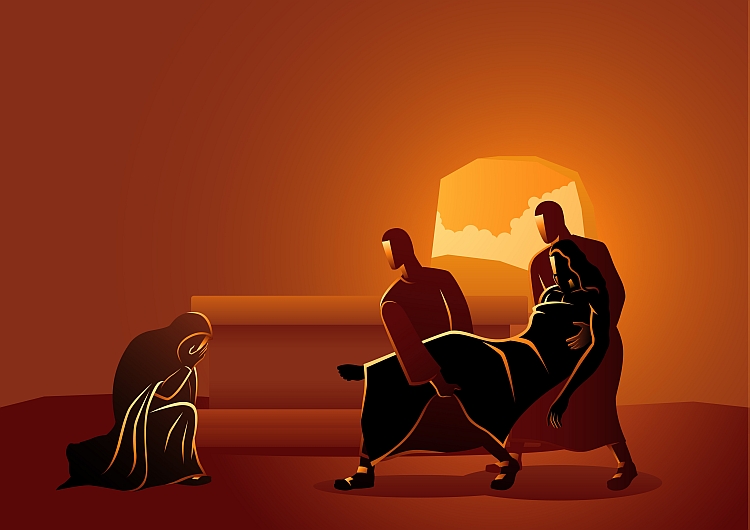 We often skip over the tomb when going from the cross to the resurrection. There is a mystery and an uncertainty about the grave that leaves so many questions unanswered. Before Jesus, this was the end of the story. The stone stays there, Jesus’ wrapped body is left in the darkness.

The disciples must have felt desolate; lost and abandoned. There are times when we too feel abandoned; unable to find God in the darkness. We too find ourselves trapped in the tomb. But unlike the disciples on that first Good Friday, we know that the tomb is not the end. There will be times of darkness, there will be times of uncertainty, but those times can be filled with faith and with hope. God does not abandon us.

Lord, we thank you that you are always with us. Help to remind us of the hope and promise of Easter morning when we feel lost and abandoned. We pray for hope for all in these uncertain times; that they may find a light in the darkness. Amen.

Thank you for joining us for our virtual Walk of Witness.  Join us at 11am on Sunday on Facebook for our Easter morning service.

May the grace of our Lord Jesus Christ, and the love of God and the fellowship of the Holy Spirit be with us all, now and evermore. Amen. 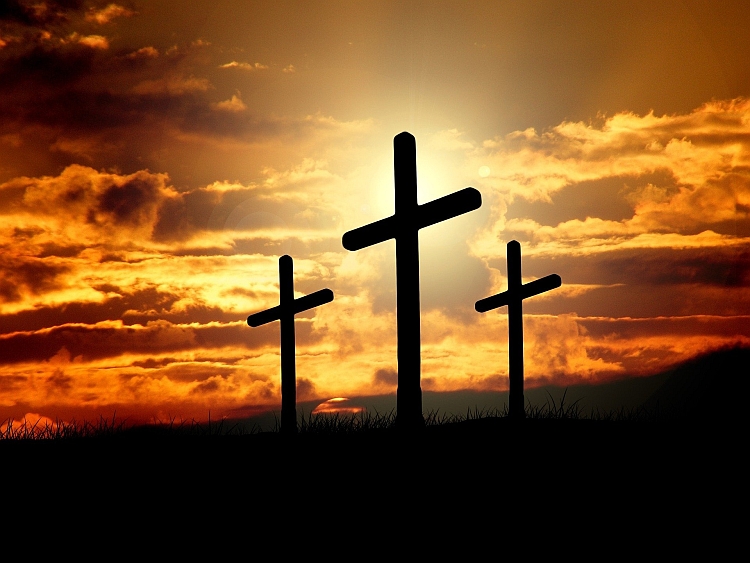 Christ Church Uxbridge
Our church cafe is open every Tuesday and Thursday from 10am - 2pm, serving drinks, snacks and light lunches at very reasonable prices.