Welcome to the latest issue of our church newsletter. I hope you are keeping well and staying safe. Our church is open for Sunday services but we will continue to live-stream our services and send out our newsletter regularly for the foreseeable future.

You can find previous issues of the newsletter on our church website at www.christchurchuxbridge.org.uk We would love to hear from you and are looking for uplifting and encouraging content to share in future issues of this newsletter. If you have any ideas or content that we can share, please do email them to Louise (publicity@christchurchuxbridge.org.uk)

Creator God, abundant giver, at a wedding in Cana
you turned the ordinary into the extraordinary.
We come to you, ready for you to turn our ordinariness
into something extraordinary for you today.
Amen.
(Taken from Roots)

Reflection from 9 January – The fourth king 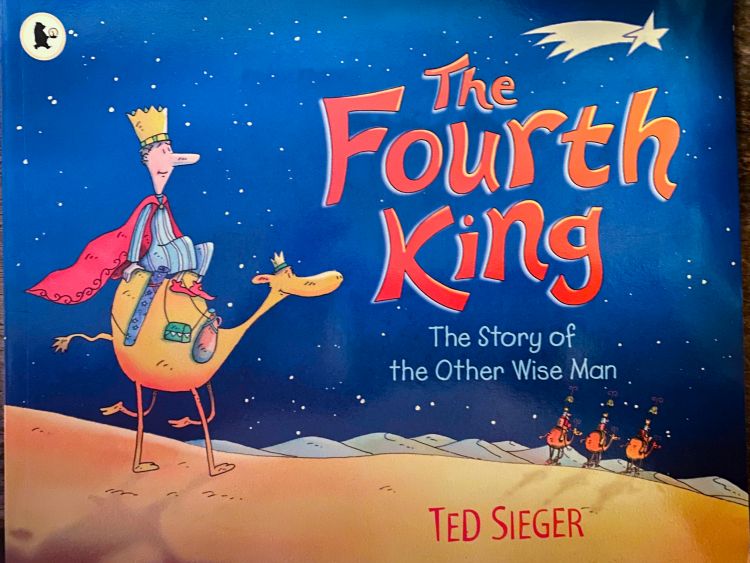 King Mazzel was the ruler of a very, very small kingdom. A kingdom that was just him and his camel, Chamberlin. Like the three kings we’re more familiar with, he was a stargazer awaiting the sign that a king had been born. And when he saw the star appear in the sky, he put on his royal cloak, packed his most valuable possessions – the royal star map and the royal star crystal – and headed off on his camel to find the new king.

But as he made his way from his castle across the desert, a sandstorm blew up. He ploughed on through the wind and the sand blowing all around them and then he heard a cry. There in the storm, a little girl, lost and frightened. The king picked her up and carried her through the storm until they found her family. Then he continued on his way to try to find the new king.

But then he came across a travelling merchant camel train who were lost in the desert, without a map. So once again the king paused on his journey and led the camel train safely out of the desert to their hometown. And just to make sure that they wouldn’t get lost again, the king gave them his star map.

Off the king went again on their journey. But then he heard a tinkling of a bell and saw a small plant, withered and thirsty. The king stopped to water the plant which began to flower and dropped a small fruit into his hand. Then he set off again, over the mountains and down into the valley. This time he was stopped by a long brick wall. As he made his way around the brick wall, he discovered that the wall was being built by children forced to work as slaves by a rich man.

The king gave up his star crystal to try and buy their freedom, but the rich man told him that it was only enough to allow him and his camel to go free. And so the king stayed with the children to help them to build the wall.

The king and the children were then stopped by shepherds. The shepherds had followed the star to a stable and had seen the newborn king. But they also had terrible news. Soldiers had been sent to Bethlehem by King Herod to kill children. King Mazzel knew he had to do something to save the newborn king. So he left the children with the shepherds and ran down the hill. There were soldiers searching the valley and the king hid as he waited for them to go. Out of the shadows, he suddenly saw a man and a woman with a newborn baby. The king beckoned them towards his hiding place but the soldiers were coming closer.

And so the king ran out to distract the soldiers who chased after him, but just as they were catching up with him, there was a sound like thunder and the soldiers were scattered by three royal camels passing through. I wonder who they might have been?

At last the king could see the stable up ahead and he ran towards it, only to find that he was too late! The stable was empty and the king fell to his knees and wept. But as he knelt there in despair, he heard a voice:

And Jesus said in the Bible, didn’t he, that whatever you do for the least of these, you do for me. Whether that’s giving water, or food, or shelter, or just stopping to help those in need around us, sharing God’s love with those we encounter wherever we are. It might mean that our journey along the way is not quite as we expect it to be, taking us on unexpected and perhaps frustrating detours. But it’s in those unexpected detours that we often learn the most important lessons, and find out what really matters. Life is a journey. There will be twists and turns along the way. But if we can stop along the way and help others, and also allow them to help us in turn, our journey will be all the richer for it.
Louise George
The story of the Fourth King is taken from the book “The Fourth King by Ted Sieger”

Jesus Changes Water Into Wine
On the third day a wedding took place at Cana in Galilee. Jesus’ mother was there, 2 and Jesus and his disciples had also been invited to the wedding. 3 When the wine was gone, Jesus’ mother said to him, “They have no more wine.”

5 His mother said to the servants, “Do whatever he tells you.”

6 Nearby stood six stone water jars, the kind used by the Jews for ceremonial washing, each holding from twenty to thirty gallons.

7 Jesus said to the servants, “Fill the jars with water”; so they filled them to the brim. 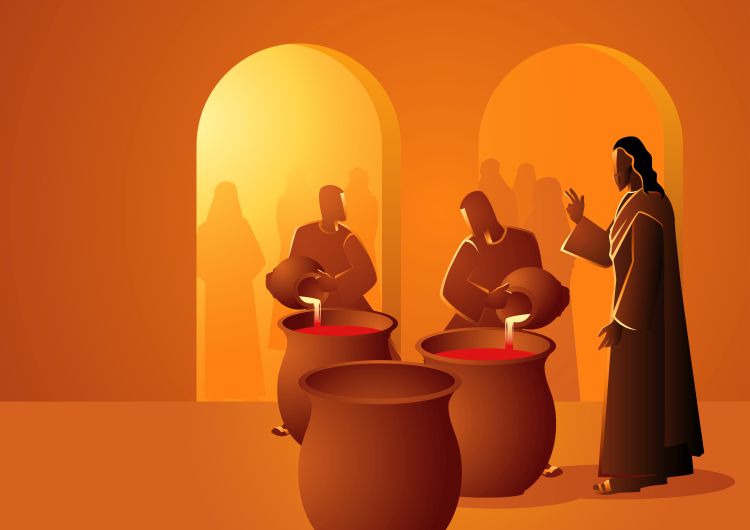 8 Then he told them, “Now draw some out and take it to the master of the banquet.”

They did so, 9 and the master of the banquet tasted the water that had been turned into wine. He did not realize where it had come from, though the servants who had drawn the water knew. Then he called the bridegroom aside 10 and said, “Everyone brings out the choice wine first and then the cheaper wine after the guests have had too much to drink; but you have saved the best till now.”

11 What Jesus did here in Cana of Galilee was the first of the signs through which he revealed his glory; and his disciples believed in him.

We meet at 11am for our Sunday services, which are also live-streamed on our Facebook page.  If you wish to view our services online, you can find them at www.facebook.com/christchurchuxbridge. You do not have to be a Facebook user to watch them – our services are publicly viewable. You can also view a recent service on our church website. This week’s service will be our Inclusive Sunday service, led by Christ Church member, Joanne Mackin. You can find the order of service here.

If you are unable to join us in person or online for our Sunday services, but would like to receive a recording of them on a memory stick to watch at home, please let us know.

Our next fundraising activity for this year’s church charity, HALO Children’s Foundation, will be a family film afternoon in the chapel from 1pm on Saturday 22nd January. Popcorn and snacks will be available to enjoy during the film. There is no charge for the event, but if you would like to make a donation to HALO, you can either do so via our online fundraising page (details are below) or give via the collection jar on the day.

You can find more details about HALO Children’s Foundation, our church charity for 2022 at:
www.christchurchuxbridge.org.uk/activities/churchcharity2022/
To make a donation to our church charity online visit www.justgiving.com/fundraising/christ-church-halo2022

Thank you from Yiewsley and West Drayton Foodbank

We would very much like to express our thanks to you all at Christ Church Uxbridge for your kind donation of 48.4kg of items during December 2021 to the Yiewsley & West Drayton Foodbank. 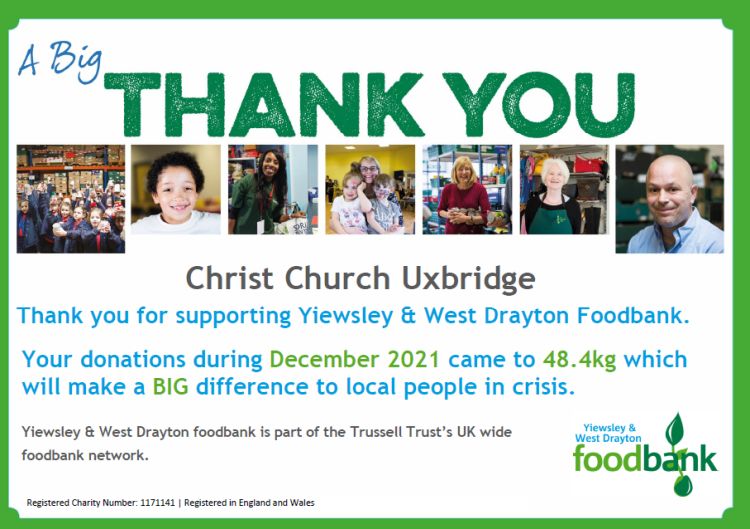 Your donations will make a big difference to local people in crisis and helps us to make up emergency food bags with enough nutritionally balanced food for 3 days. For a single person this equates to around 10kg of food, for a couple this is about 15kg and for a family of four, about 20kg or four large bags of shopping.

We are very grateful for your support enabling us to meet our vision to help those in need and to address the underlying causes of their poverty and hunger.

From the Circuit newsletter

There is a Taize Service at the Lighthouse Centre, Queens Walk, South Ruislip, HA4 0NL on 13th Feb at 4pm. 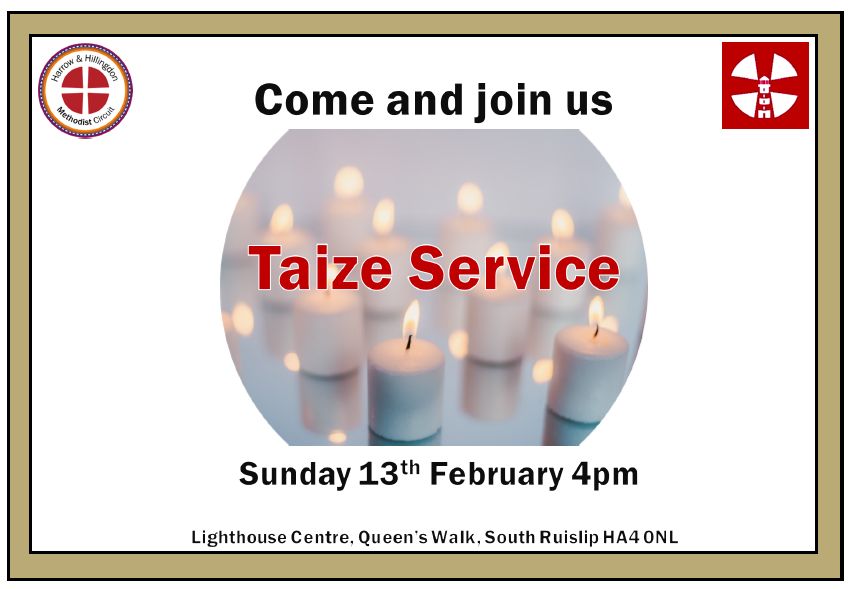 Taize Services consist of the singing of distinctive, and much-repeated prayer chants during candlelit prayer services. Taizé music highlights simple phrases, usually lines from the Psalms or other pieces of scripture, repeated or sung in canon. The repetition is designed to help meditation and prayer. All are welcome.

Christ Church Uxbridge
With young people across the country taking exams now and over the coming weeks, we share a prayer for them by Rev Nicola Langton-Miller, Chaplain of Liverpool & District Battalion 🙏 #BoysBrigade #FaithInYoungPeople

Christ Church Uxbridge
This week is Christian Aid week. If you would like to support the work of Christian Aid, you can do so via our e-envelope at https://envelope.christianaid.org.uk/envelope/ccuxb2022